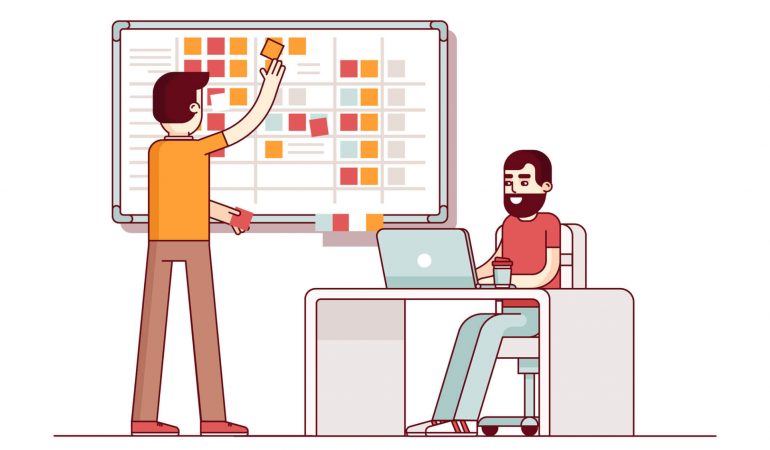 Recently, many personal Kanban apps have emerged in the personal productivity space. I bet that you have tried many of these apps. And most probably, few had good integration with email, right? In this article, we will explain the benefits of using a personal Kanban application within the email. But first, let’s explain a bit about the history and the idea behind Kanban.

Kanban as a method of organizing teams and workflows has been around since the 1970s when Toyota began implementing it in their US auto plants. It soon became widely recognized as a powerful method to organize complex teams and projects and was adopted by other businesses and industries, most notably in film production and software development.

Businesses like Kanban boards because they make it fast and easy to assess the status of complex projects, allocate tasks, identify backlogs, and adjust priorities. Because these Kanban boards are typically physically hanging on a wall in a workspace, the information is clear and transparent to everyone on the team.

Project leaders and managers love seeing all the work laid out visually and tracking tasks through the workflow. But it wasn’t until 2011 when Jim Benson published the book Personal Kanban: Mapping Work, Navigating Life that large numbers of people began to modify the Kanban system to apply to their personal lives, work, and projects.

Suddenly Kanban wasn’t just for big businesses with large teams; it was for anyone who wanted to get organized and stay productive. In the simplest form, a personal Kanban system can consist of a small whiteboard and sticky notes. The notes are color-coded by project or goal, and they are placed in three columns on the whiteboard.

When a task is identified, it’s written on the appropriate color of note and placed in the To-Do column. When you begin to work on that task actively, you move it to the Doing column. When it’s completed, the note goes (obviously) into the Done column.

A personal Kanban can be modified as needed, based on what works best for you, and people love Kanban systems for their flexibility and adaptability. The only two core principles of a Kanban system are:

Visualizing tasks and priorities is crucial in a Kanban system. The idea is that you don’t spend time making or reading lists or redefining priorities; you can see everything at a glance.

By making your To-Dos visual, it’s fast and intuitive to identify backlogs and priorities, re-allocate resources, and understand your workload comprehensively. Also, the visualization of completed work helps you recognize your accomplishments and reward yourself for progress made.

2) Limit the amount of work being done at once

In a physical Kanban board, this is done by making the “Doing” area small, so that it can only fit one or two tasks. Kanban seeks to limit multitasking by only having you focus on one (at the most two) tasks simultaneously. Again, this is compatible with the way the brain works.

When a task is interrupted, it takes as long as 25 minutes to return to full focus. When tasks are interrupted, we lose an average of 15 IQ points when we return to the work at hand. Multitasking causes errors. A person working on three simultaneous tasks makes three times the errors of a person only doing two.

This is why Kanban is favored by software developers, for whom errors are costly and troublesome. Limiting the current tasks to one at a time allows you to focus and complete the task more quickly and accurately than working on several things at once.

Kanban seeks to remove distractions, create clarity, and focus your many projects down into one simple step at a time.

The great thing about Kanban is that it’s compatible with other existing productivity and project management systems. People use Kanban alongside other productivity systems like GTD, Inbox Zero, the Pomodoro Method, and apply the system to all kinds of different projects.

Because it doesn’t require complex tools or a comprehensive ecosystem and is simply a way of visualizing and focusing work, Kanban is an incredibly versatile method of keeping yourself, your projects, and your life organized and moving forward.

One way to make the Kanban method even more versatile and useful is to use a personal Kanban app. Flow-e makes implementing a personal Kanban system simple, and provides some key advantages over the traditional physical Kanban board:

1) Flow-e is responsive. You probably won’t be carrying your whiteboard to and from work, on business trips, or into meetings, and yet you need that information at your fingertips all the time.

2) Using a Kanban app keeps it with you, and that keeps it current and accurate, no matter what changes the day may bring.

3) Flow-e includes email management. In a traditional Kanban system, if you got an email with a task or an assignment, you would need to write it down on a card or a sticky note.

4) With Flow-e, emails become tasks by just dragging-and-dropping, making it simple and intuitive for your task list to stay up-to-the-minute, and for you to follow up on tasks in progress.

5) Flow-e manages your schedule. Kanban systems don’t naturally link tasks to time, but that’s a luxury few of us can afford. With Flow-e, not only are your calendar events visualized, but tasks can be scheduled and have reminders.

6) Flow-e makes delegation simple. While it may be possible to write a task on a sticky note and walk it over to someone else’s desk, it’s a little weird, and doesn’t have natural follow-up included in the task.

7) Flow-e makes delegation simple, and includes built-in follow-ups and reminders, so that you don’t lose sight of tasks you’ve delegated.

If you’ve decided to join the millions who have adopted a personal Kanban system to get organized and stay that way, congratulations!

And if you’re one of the thousands using Flow-e as a personal Kanban app to make your system more comprehensive – it’s even better!