Home
Blog
What is Akrasia and How to Overcome It 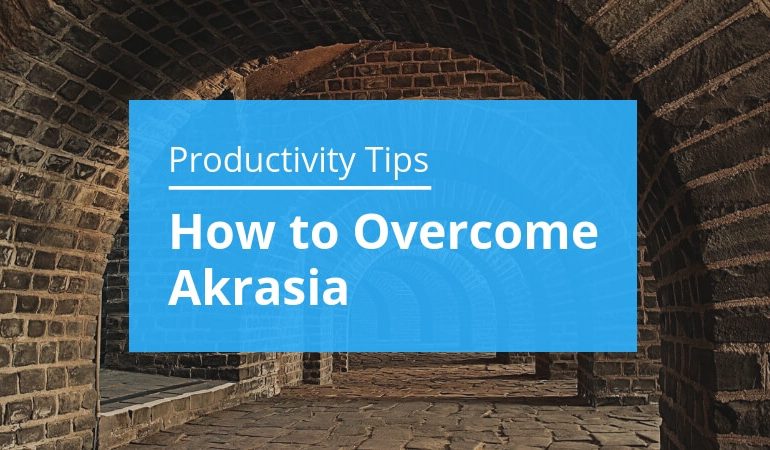 I’ve recently finished a great book called “The Personal MBA” by Josh Kaufman. I feel a little bit late by reading this book in this age. I could have read it before going to the university, and I would have ended up choosing a better discipline to study.

Nevermind. The timing is actually perfect, as two chapters caught my attention: Akrasia ( ah-KRAH-see-ah) and Monoidealism.

In this article, I will explain the problem behind Akrasia.

Table of Content hide
1 What is Akrasia?
1.1 He outlines seven examples which could definitely help you recognize if you are experiencing Akrasia:
2 To wrap it up
3 How can you deal with Akrasia and Procrastination?

“Akrasia is the experience of knowing an action would be in your best interest, but you don’t do it. Akrasia is one of the most widespread and persistent barriers to getting things done.”

The Stanford Encyclopedia of Philosophy refers to Akrasia as “Weakness of Will.”

Akrasia is an old problem and discussions about the source of Akrasia go back to Plato, Socrates, and Aristotle. The term Akrasia comes from the Greek and means “lacking control/command over oneself.”

Plato and Socrates believed that Akrasia was a moral defect, while Aristotle argued that it comes from a mistaken opinion about what someone “should” do.

For the general reader, we could say that Akrasia is similar to procrastination, but they are not the same thing, they are related.

Often, procrastination occurs when you have decided to complete a task, but you keep postponing until later but without consciously choosing to do it then. For example, If you have “write 200 words intro by 14:00” on your to-do list, but you watch Netflix for hours without ever writing a word, that’s procrastination.

However, Akrasia has more in-depth stems. It’s the feeling that you “should” do something, without putting that thing on your to-do list. You experience Akrasia when you are thinking about changing a Habit you no longer want (“I should quit drinking,”) or taking a new set of actions (“I should start processing my emails daily.”) So the “should” feeling is still there, but it doesn’t lead to actions.

Same as procrastination, Akrasia is one of the most common and widespread barriers to getting things done.

According to the research I’ve made, it’s useful to have a strategy for combatting Akrasia.

“Akrasia has four general parts: a task, a desire/want, a “should,” and emotional experience of resistance. Within this framework, there can be many potential sources of resistance:”

He outlines seven examples which could definitely help you recognize if you are experiencing Akrasia:

To wrap it up

Akrasia is when you know you should do something, but you are not doing anything towards the “should.”

But if you know that you should do something and break down the steps into a to-do list, but you keep postponing their completion, because you have more “critical” small to do like chores, then we call it procrastination.

How can you deal with Akrasia and Procrastination?

I’ve been a procrastinator and have experienced Akrasia too. To deal with the Akrasia, you just have to start writing your ideas and the steps to comple it. It’s crucial to “bleed” out all of the things you should do. Get a to-do app or a notebook and write down what’s on your “I should do” mind.

Once you have the steps, you will have to beat your procrastination. I’ve found that the best approach to procrastination is applying some of the Personal Kanban principles for task management, such as working and focusing on one task at the same time until marked as done and the approach to Getting Things Done. The GTD principles teach you the type of actions you need to take, depending on the nature of the task and the time it will take to complete it.

My advice is to just freaking do it. This is the right mindset. Be “in power over oneself (enkrateia, the antonym of akrasia).” Design your future actions and live a life of enkrateia rather than one of akrasia.