Home
Blog
34 e-mail Facts: Did you know that the e-mail predates the WWW by 23 years 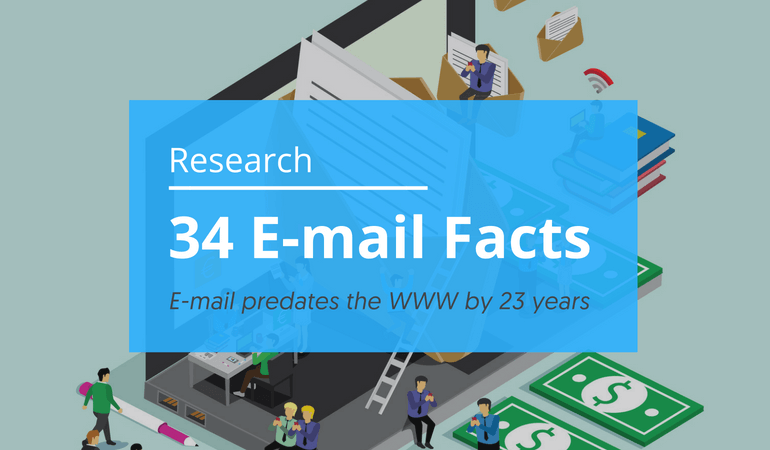 Lately, I had to dig into e-mail data to find some numbers for one of my marketing reports. And I have to admit that I’ve seen some email facts which were unknown to me. Actually, I have never been a colossal email admirer. E-mail used to cause me more vertigo, than any other type of communication (as I am an introvert).

But who would think that email facts could bring some joy? I’ve picked the most interesting, and I’ve ended up with 34 facts about the e-mail which are probably unfamiliar to you, too.

1) Billions of emails are sent each day

In fact, over 205 billion emails are sent each day. This number is expected to go up by 246 billion by 2019. Even the fact that these days there are more channels to communicate with your audience, these numbers show that email is still one of the most popular channels for communication.

2) The return on your investment is huge

Email makes real money. With most of the email marketing, if you spend a buck, you can get almost $38 bucks back from the investment. You will find that you have many benefits in email marketing, but making money is one of the best.

3) Email can grow your business

Nearly 80 percent of professionals report that emails are going to lead to new customer acquisition and keep them as customers. As the old adage says “If you’re not growing, you’re dying.”

72 percent of the businesses use email as the primary way of communication. You may think that these are emails going back and forth between the office.  However, consumers often are going to learn more about the businesses from an email, before they make a purchase.

5) What was the first email?

The first person to hit the send button on an email was Ray Tomlinson. He had to develop some applications from MIT’s ARPANET (later to become the Internet). He mainly stopped working on the project and decides to work on email “mostly because it seemed like a neat idea.”

Definitely, the first message was a big step for e-communication. Ray Tomlinson can’t recall the exact content of the first message, but the headline of the email contained “QWERTYUIOP” — the letters found on a QWERTY keyboard.

6) Where did the word SPAM come from?

Now this one was pretty interesting to me. So the term SPAM seems to pre-date the e-mail and has been traced back to the ‘80s, where the term is used in online role-playing chat rooms called MUDs, referring to any type of abusive online behavior.

To my surprise, the users seem to be less creative with their passwords. The all-time most popular password for protecting our e-mail is “123456.” This fact comes out in 2009 when more than 10 000 Hotmail passwords leaked.

Often the popular choice is going to come out is 123456. This comes out on top in 2009 when more than 10,000 Hotmail passwords were leaked. This also still tops the list of the standard password that people are using. We must try harder.

In Morse code, the “@” sign is known as a “commat”, an abbreviation of “commercial at.” Surprisingly, the Morse code didn’t have a character for the “@” sign until 2004, where it was added for the use with email addresses. This is the only official change to Morse code since World War I.

9) When was the first е-mail sent from space?

So, the first email sent from the space happened in 1991. Using Apple’s early AppleLink software on a Macintosh Portable, the crew of STS-43 Atlantis transmits the following:

“Hello, Earth! Greetings from the STS-43 Crew. This is the first AppleLink from space. Having a GREAT time, wish you were here… send cryo and RCS! Hasta la vista, baby… we’ll be back!”

10) Email is older than you think

This is going to shock quite a few people as the use of email has been around since 1971. It’s funny when you count the fact that the e-mail system predates the World Wide Web by 23 years.

11) According to a report by Experian, more than 56% of the brands that are using an emoji in the subject line to get a higher open rate.

12) According to 10 email marketing studies, Tuesday is the best day of the week to send important emails.

13) 73% of millennials identify the email as the number one means of business communication.

14) People may say they like HTML emails, but usually, the plain emails get a higher open rate.

15) Almost 70% of the people check their emails while watching TV, 57% before bed or when waking up and oddly almost 80% while on vacation.

17) The emoji in email marketing messages have increased by 775% in one year.

19) According to McKinsey & Company article, on average, employees spend 13 hours a work week checking their email.

20) According to Pew Research, 92% of adults online use email and 61% of them use email on an average day.

21) GetResponse reports that more than 21% of all messages are opened within the first hour of sending.

22) The emails that have graphics get a higher open rate and even a better click-through rate than any of the text-based emails.

23) Almost 47% of the emails are opened based on the subject line, reports Invespcro.

24) Coshedule research says that it is best to send emails at 10 AM and between 8 PM and midnight.

25) Some research has shown emails are checked every day by 99% of the people. In some cases, people check the emails up to 20 times a day.

26) The GDPR is a reality for EU-based customers, as privacy issues are more important than ever before. The Majority of the customers are happy to share information, but 88% of them want to know how the information is used.

29) The average hours that people spend checking for new emails per week is 30.

33) 42% of the people check their email when using the toilet.

34) 18% of the people “play the danger game” and check their emails while driving.